Is it safer above ground? Your family’s safe place matters

Tornado season is upon us and during this time it is encouraged people prepare a safety plan in case of a weather emergency. In reviewing your safety plan, do you have a safe place for your loved ones and pets in a dire situation? Many have relied on underground shelters to take shelter when the conditions prove necessary. Are these the safest choices for the best protection from a possible tragedy? With modern technology, aboveground safe rooms have become a smarter choice for families.

A safe room is a hardened structure specifically designed to meet Federal Emergency Management Agency (FEMA) criteria and provide life-safety protection in extreme wind events, including tornadoes and hurricanes. According to FEMA, “aboveground safe rooms are required to be rigorously tested to ensure that they can also provide protection from windborne debris”.

During the Cold War, fallout shelters or underground shelters, became a growing trend and encouraged by the Government to protect families from fallout from a nuclear weapons attack. When the threat of the Cold War subsided, these shelters became popular for protection from extreme weather situations. Thus, it became a commonplace for areas that were susceptible to extreme weather situations to install similar underground structures.

While a safe solution at the time for severe conditions, there are also disadvantages to this
solution.

Underground shelters built within a home also come with the above disadvantages and puts families at risk of being trapped within their shelter if the home or large debris were to collapse upon it. 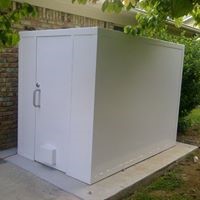 aboveground safe rooms, due to modern technology and engineering, have much more to offer families when it comes to their protection. According to the National Storm Shelter Association (NSSA), in 1999, aboveground safe rooms became widely publicized as a family’s above ground storm shelter survived the F5 tornado that swept through Oklahoma devastating the area. This event encouraged FEMA and the State of Oklahoma to put in place incentives for building storm shelters in houses that were being built or rebuilt after the tornado. Underground shelters were not included in these incentives because of the lack of standards or knowledge regarding their safety.

There are many advantages to installing an aboveground safe room.

Do I need a safe room?

Chapter 2 of FEMA P-320 provides information to help homeowners determine whether their home needs a safe room. Building owners should ask themselves several questions when considering whether to install a safe room:

Having a safe solution in a weather emergency is crucial for you and your family. Installing an aboveground safe room has many advantages for families versus the traditional underground shelter. While underground shelters may have been the safest solution in the past, today’s aboveground safe rooms are engineered and designed to withstand the most severe conditions, including F5 tornadoes. They also keep families safe from flooding threats, and offer a more efficient and accessible place to go during a severe weather event.